How attractive is Metro Manila?

Before answering this question, a framework has to be established around the questions: to whose eye does attractiveness matter? And attractiveness in what sense?

The framework begins from the general notion of globalization, a concept where the global economy is integrated by openness of financial flows, trade of goods and services as well as the mobility of people. Next, alongside this understanding is to recognize how and where it manifests. Over the past years, foreign direct investment (FDI), which represent the relative number of investments going out of or coming into countries, has been the only way to enter a foreign market. Thus, FDI act as a conveyor and network which allows the globalization of economic activities. On the other hand, globalization takes effect where FDI geographically agglomerate across space, clustering together in specific locations. These specialized and innovative firms in close proximity to each other benefit from the transfer and sharing of knowledge, technology, resources and human capital. The level of productivity taking place in these clusters, in turn, increases a location’s competitiveness thereby influencing overall economic performance. Where cities compete to pull in significant foreign investments, spurs the need to develop FDI-attractive cities. A concrete example was how cities competed to be the location of Amazon’s secondary headquarters. Therefore, attractiveness that matters is through the eyes of investors.

Attractiveness, on the other hand, tends to be a broad subject. In the midst of a large body of knowledge dedicated to the study of urban attractiveness in general as well as locational preferences of FDI firms, a look at urban attractiveness through a location’s spatial qualities and urban character is the focus of this article.

Now that the framework has been set, an empirical approach is taken. FDI inflow count coupled with locational data of Metro Manila together with Singapore, Hong Kong and Bangkok for comparison, are obtained and mapped through GIS. These data already give away information about the number of FDI attracted by each city but we still want to know how and why. Based on the geomaps, where FDI inflow count cluster across space are taken as sample FDI districts interpreted at a similar scale (1,500-kilometer radius).

30 FDI districts are identified, with Metro Manila having six: Makati Central Business District (MCBD), Bonifacio Global City (BGC), Pasong tamo, Ortigas, Mckinley hill Bay City and Filinvest city. As shown in the geomaps, FDI behavior tend to cluster in Central Business Districts and closer to ports and bodies of water. At the same time, districts are seen to be in close proximities to each other. From these sample FDI districts, urban attractiveness variable and indicator values, derived from supporting studies and concepts, are tested and analyzed through inferential statistical analysis. Results on some of the indicators include:

Urban extent or the edge of the built-up area relative to the official administrative area has a significant negative effect which means that as cities sprawl, they are most likely to be less attractive to FDI inflow. This talks about how density and compactness are two important spatial qualities to be considered.

Layout or the way streets and blocks are structured play a significant role in shaping movement patterns that set both the parameters of succeeding developments as well as the character of a place. The results show that layout has a strong significant effect on FDI count. As the value of layout increases, FDI count has the likelihood to increase by 96%. Increase in layout means finer grain, smaller blocks, narrower street widths as well as more intersections and tend to be more regular than organic. By theory, fine grain is related to legibility and walkability, given easier navigation and movement through shorter blocks and narrower streets. Walkability is also reinforced by the activation of street life due to small plots and narrower streets, thereby creating closer interaction between the plot and the street.

Land Use Mix shows that a diverse land use poses significant positive effect on FDI inflow. An increase in Land Use has the likelihood to increase FDI by 90%. This proves that as there are varied and diverse uses with active open spaces as well as high commercial activity that allow constant transactions, the more likely it is for cities to be attractive to FDI. Districts with the highest land use mix are the CBDs of the respective cities.

In reference to the entirety of the study, attractive cities are centrally-located, compact, walkable with accessible public transport, boasting of its natural site features and open spaces nestled within its tall, modern, simple and sleek building forms and topped by softscape and landscape elements. It is also a city with diverse land uses where a high level of commercial and civic activities can take place and of which are benefited likewise by a diverse users. 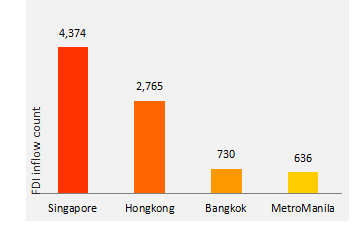 Hence, with FDI inflow count, where and how they cluster and what spatial qualities and character they are attracted to, the main question can then be answered. How attractive is Metro Manila? In terms of spatial quality and urban character, MCBD and BGC performed well relative to the rest of the districts. However, given the total 636 investment inflow count or roughly 1% of the total FDI inflow in South East Asia and the last among the 3 cities, overall, not quite yet.

Jec Alforque is an architect by profession and urbanist by passion. She is interested in the convergence of the spatial, social, economic and environmental facets of life and how they manifest themselves in the urban setting.

Born and raised in the tropical land of the Philippines where having fun is an understatement, she moved to Europe to pursue a more global way of approaching things. She graduated at IHS MSc Urban Management and Development. She currently resides in Barcelona, awaiting to get her hands dirty for heaps of urban planning and management issues.